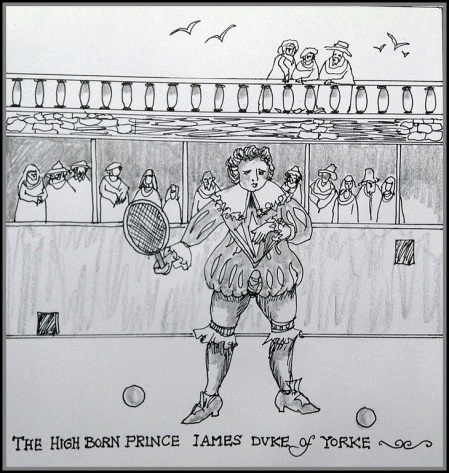 I am finding it incredibly difficult to keep abreast of the “scoring” in a tennis match, (writes Hazel) mostly to do with my misunderstanding of numbers, plus, the oddity of the scores ie: 15’s…30’s…40’s etc. So I thought it best to find out just how this game originated, how the scoring was invented and how it developed. Real Tennis: The History of the Game of Tennis.

Apparently, the game goes back in time to the  Greeks and Romans, who it seems loved playing tennis! It was a hand ball game back then..called..(.in French, jeu de paume). The Roman legionaries, moving into France (Gaul ), took the game with them playing it against the walls of the old towns,outside Castles and Monastaries. In fact the word, Tennis, is thought to stem from the Anglo-Norman imperative “tenetz!” A warning cry given by the server, “Take this! Play!”

The shape of the court, as we know it today, evolved slowly over the middle ages, by the end of the 15th century, approx dimensions were agreed on.

Tennis is traditionally thought of as the Game of Kings, and it was the ecclesiastical high-ups who first put their stamp of approval on the game. During the Middle Ages, players began to protect their hands with a leather glove. Later this glove was to acquire gut strings in the shape of a guitar; later a short handle was added to it – a battoir. This was covered in vellum, which led to the stealing of manuscripts by unscrupulous persons.

It is a well documented fact that between 1550 and 1700 there were no fewer than two hundred and fifty courts of various shapes and sizes in Paris alone. Henry V111 was a huge fan of the game, which historians now refer to as ‘real tennis’. There are many fascinating stories woven around this 15th century game of Kings and Princes.  I believe the scoring was developed by using a clock: 15 minutes…the first score..30 minutes..then 40 minutes and so on… So this explains the unusual numbering, which I was finding totally baffling to my none mathematical brain!